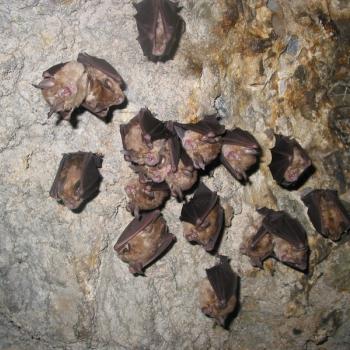 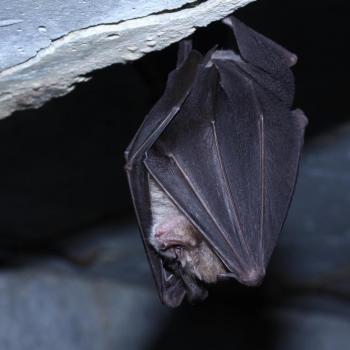 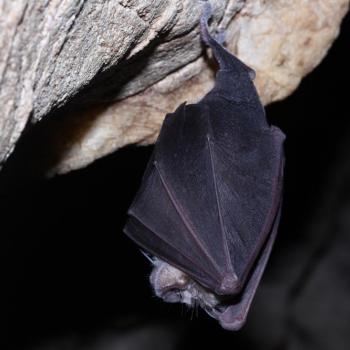 It is a large bat (the largest of the family Rhinolophidae) with a wingspan of up to 40 cm and a weight ranging from 18 to 24 grams. The fur on the back is brown or brownish-gray, often with reddish edges. The abdomen is white - gray to white - yellow. The upper projection of the saddle is round at the edge, while the bottom is short.

The Greater horseshoe bat ranges in northwest England and Wales as well as mainland Europe (except the Scandinavian countries, the Netherlands and most of Germany, Czech Republic and Poland). It is also found in at the largest islands of the Mediterranean, Northwest Africa and through the Balkans, Anatolia and the Middle East, up to Korea and Japan (but it is absent in India). East Asian populations are probably of a different species.

It is very common in Greece, as it is found throughout the mainland, and has also been found in many Aegean and Ionian islands and Crete.

It prefers relatively warm areas with a variety of habitats (forests, scrubs, pastures and crops) and rarely inhabits areas above 1500 m. It is often found in wetlands with rich tree vegetation as well as residential areas. During autumn and winter it roosts in caves and mines, where it falls into torpor when food is scarce. In Greece and other Mediterranean countries, it forms reproductive colonies mainly in caves and mines. In the northernmost countries it gives birth almost exclusively in buildings. In the Mediterranean, the Greater horseshoe bat often uses the same roosts as other Rhinolophus species, but also with species of the genera Myotis and Miniopterus.

It flies relatively slowly, near vegetation or ground and hunts within a radius of up to 16 kilometers from its shelter. An important part of the hunt is made from perches (tree branches or upright rocks): as it hangs, it scans its surroundings with the emitting ultrasounds and attacks the insects that approach it. It chases even in winter when the weather is mild. It mainly feeds on scarabs and dung beetles (looking for in pastures) and moths, but also on smaller flying insects, sometimes spiders.

Mating usually takes place in late summer or autumn, but sometimes in winter or spring. Males choose their "love roosts", which are visited by females to select a partner. Females mature sexually between the second (Balkans) and the fifth year (Great Britain). Only one newborn is born each year, which begins to fly after three or four weeks and is weaned 1-2 weeks later. The maximum recorded age is 30.5 years.

It is included in Annex II of the Bern Convention and the Bonn Convention and also in Annexes II and IV of EU Directive 92/43. It is also protected by Presidential Decree 67/81 and UNEP / EUROBATS. Due to its wide distribution, it is considered as a species of Least Concern both in Greece and internationally (IUCN). It has almost disappeared from Germany and has undergone significant population reductions in the UK due to the use of agrochemical and antiparasitic drugs and chemical wood preservatives, as well as the degradation of its roosts and foraging habitats.