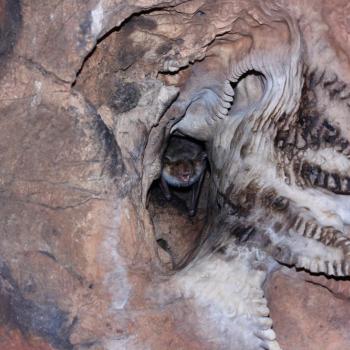 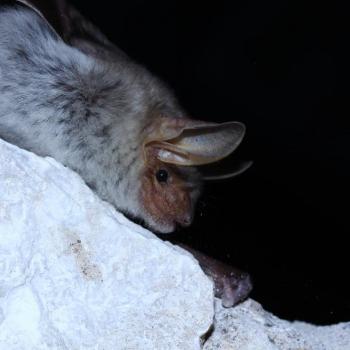 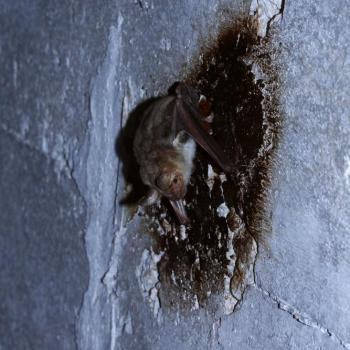 It is one of the largest bats in Greece weighting 20-27 grams and having a wingspan of 35-45 cm. It has large ears and wide nose. Its fur is brown or reddish brown on the back and distinctly off-white on the belly. It is morphologically similar to Myotis blythii, but slightly larger in size, with a longer jaw length (the basic diagnostic character) and yellow toned neck, while at the end of the tragus many individuals present a small black dot. When observed in distance these two species do not stand out, and have been found to hybridize in the Mediterranean.

The Greater mouse-eared bat occurs throughout continental Europe, up to Poland and Ukraine, with few recordings in the southern tip of Great Britain and Sweden. It lies east to Turkey and the Middle East. In Greece it has been found in several areas of the mainland, as well as in some major islands of the Ionian and the northern Aegean. However, its true distribution in our country is doubtful because of its close affinity and similarity to M. blythi.

It prefers deciduous and mixed forests, but can also hunt in pure conifers. A sparse or no vegetation is a prerequisite for free access to the ground where it usually chases its prey. Less often it hunts over open areas. In Greece its colonies are found in caves and mines throughout the year. In summer, males are usually roosting alone in different types of shelters.

It hunts fast and relatively flexibly, often at a low altitude of just a few meters above the ground with its big ears and snout down. When it detects prey from its sound (insect wings rustle, movement), it pounces, covering the prey first with its wings and then capturing it by mouth. It also hunts flying insects, catching them with the uropatagium (tail membrane) or the wing. Hunting areas are within 15 kilometers from the shelters, sometimes further away.

It forms large breeding colonies usually of 50-1000 females or more. In Greece, it shares its shelters with other species (genera Rhinolophus, Myotis and Miniopterus). It gives birth to a baby which becomes independent after 5 weeks. Births in the Mediterranean begin in early April and colonies disperse in late August, when they begin to mate. Usually males attract females by "singing" out of their shelters, where they harem up to 5 females. The maximum known age to date is 25 years.

It usually feeds on large (> 1 cm) species of arthropods living and crawling on the ground, depending on their availability: mainly beetles, but also centipedes, spiders and beetles’ caterpillars.

It is included in Annex II of the Bern and Bonn Convention, as well as Annexes II and IV of EU Directive 92/43. It is also protected by UNEP / EUROBATS and, in Greece, by Presidential Decree 67/81. It is classified internationally by the IUCN as a species of Least Concern, while in Greece it is in Near Threatened list, as it is highly dependent on groundwater habitats and few large colonies are known. It is threatened by the tourist exploitation of the caves and the excessive use of pesticides in forests and crops and of wood preservatives. It almost disappeared from Germany in the 1970s, but since then its populations have slowly recovered.