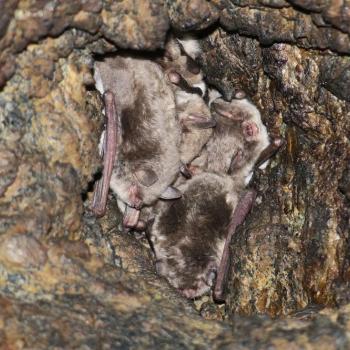 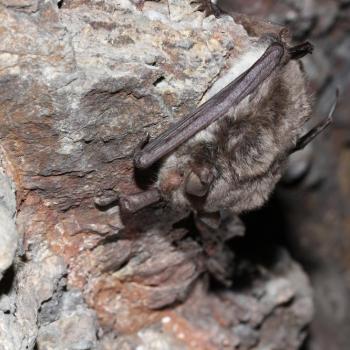 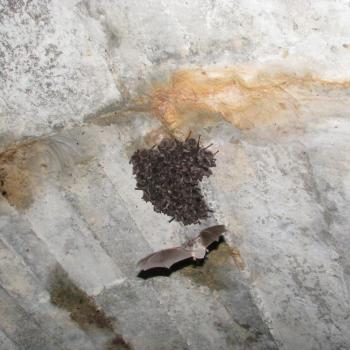 It is a small bat with a wingspan of 23 to 26 cm and a weight of 7-10 grams. Its fur is gray with a brown tint on the back and whitish grey on the belly. It has characteristically large and strong feet (over half of the tibia) with long hairs. The tragus is slightly S-shaped which allows it to be easily distinguished from the similar species Myotis daubentonii.

It is confined to the Mediterranean countries and the Balkans, from the eastern Iberian Peninsula to the coastal regions of Turkey, Israel, Lebanon and Jordan, as well as northwest Africa. In the western Mediterranean it has a fragmented distribution and it occurs in a few coastal areas, while in the Balkan Peninsula it spreads to the mainland. In Greece, it has been found in several continental locations, in all geographical districts, and in Crete, the Ionian and the northern Ionian Sea.

It prefers areas with Mediterranean and temperate continental climates, rich in caves or mines, where it forms colonies of a few tens to thousands of individuals. It seeks its prey in aquatic areas (river basins with significant riparian vegetation and near large lakes), sometimes in forests and scrublands.

The long-fingered bat forages a few centimeters above the surface of the water (even in the sea or lagoons), "fishing" its prey with its long legs and tail membrane. In Greece, the distance of the hunting areas from the shelters exceed 26 kilometers (average 13.6 kilometers). It migrates to distances of up to 150 kilometers, using caves and mines as intermediate stations for rest.

The largest percentage of females (about 70%) reaches the reproductive maturity and mates in the first year. It gives birth to one young, from early to late May in the Balkan Peninsula, later in Iberia. Their reproductive system is not well known, but they probably mate in September and October.

It mainly feeds on diptera of the families Chironomidae and Trichoptera. In Spain and Israel, scales and bones of small fish have been found in their feces.

It is included in Annex II of the Berne and Bonn Convention, as well as Annexes II and IV of EU Directive 92/43. It is protected by UNEP / EUROBATS and, in Greece, by the Presidential Decree 67/81. It is classified by IUCN as Vulnerable, as it depends on specialized habitats, and its populations have decreased particularly in western Mediterranean (Spain, France). In Greece, it is classified as Near Threatened, as it has a wide but rather fragmented distribution, forming large vulnerable colonies in underground shelters. The main threats are the tourist exploitation of caves and the nuisance to them, the collapse of abandoned mines and the water pollution.