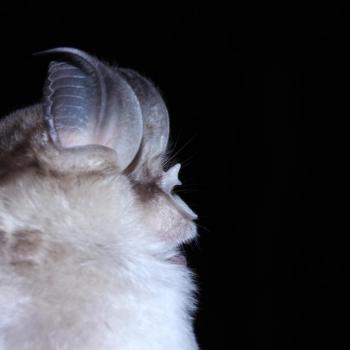 It is a medium-sized bat, slightly larger than Rhinolophus euryale and smaller than R. ferrumequinum, with wingspan up to 34 cm and weight ranging from 10 to 18 grams. The belly and face hair is pale (almost white), while the back is gray-brown. Most adult people have dark hair around their eyes, like a "mask", which is sometimes seen in other species. The upper protrusion of the saddle is slightly rounded, whereas only in this species the blade narrows sharply from the middle to the edge. At the fourth finger the first phalanx is less than half the length of the second, unlike R. blasii.

Its distribution is fragmented in the Mediterranean, where it is present in all countries except those of the Adriatic and mainland Italy. In recent decades, it has disappeared from Croatia and has almost disappeared from France. It also spreads in Bulgaria, southeastern Romania and Moldova, but also in southern Russia, as far as Afghanistan, Iran and Iraq.

In Greece, it has been found in central and eastern Macedonia, Thrace, Attica, the Peloponnese and Lesvos. It probably has a wider distribution in the country, although it does not appear to be common, nor abundant.

It prefers low- or moderate-altitude karst areas and it uses caves as roosts. It also forms colonies in mines and rarely in buildings and cellars. It is looking for food in areas with low vegetation (arable land, steppic areas) and few trees, but also in oak and olive groves. It has a flexible flight that allows it to search for food near the ground. Sometimes it hangs from tall plant branches and scans the surroundings for passing insects.

Its colonies rarely exceed 500 individuals. They usually form dense clusters with other species (in winter and summer). In autumn it forms dense clusters of males and females in caves, in which they mate. Births take place from early June to mid-July. Females become reproductively mature in the second or third year of their life and give birth to a single young, which begins to fly out of its roosts after about a month. The maximum recorded age is 12 years.

It feeds mainly on moths, and to a lesser extent on beetles, dragonflies, diptera and other insects.

It is included in Annex II of the Bern Convention and the Bonn Convention. It is also included in Annexes II and IV of EU Directive 92/43. It is protected by UNEP/EUROBATS and in Greece, with Presidential Decree 67/81. Due to the significant decline of its populations in many countries it is considered worldwide as Vulnerable (VU) (IUCN). Similarly, in the Red Book of Threatened Animals of Greece it is classified as Vulnerable, as few large colonies are known and its distribution in Greece is fragmented. It is threatened by the degradation of its roosts (nuisance, etc.) and its foraging habitats.